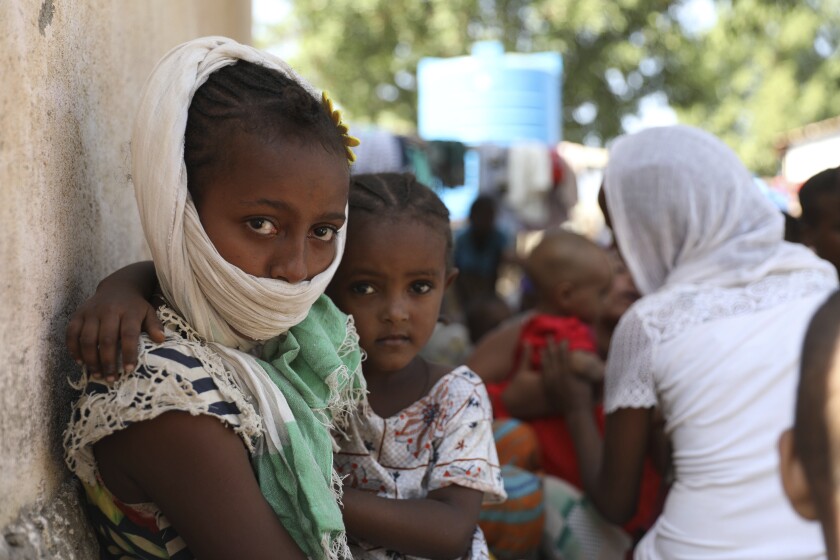 Refugees from the Tigray region of Ethiopia wait to register at the United Nations High Commissioner for Refugees in Hamdayet, Sudan, on Nov. 14.(Marwan Ali / Associated Press)

NAIROBI, Kenya — The call from Ethiopia’s capital was grim. Four hundred and fifty miles north in the region of Tigray, Hiwot Araya’s hometown was about to be besieged.

The regional government — the Tigray People’s Liberation Front — had placed a tank outside the city, camouflaged in green. Ten buses had arrived to bus residents of Tigrayan ethnicity to safety, leaving thousands of worried residents behind.

If the man’s reports are true, “the government from Tigray is planning to burn the whole city today,” Hiwot told the Los Angeles Times. Rumors from the war zone are impossible to independently confirm. But Hiwot, a 31-year-old mother of two who fled to neighboring Kenya after her husband was killed by the TPLF four years ago, said she fears a similar fate could befall her uncle, her aunt and millions of others who find themselves caught in the crossfire in an emerging civil war between Ethiopia’s military and a well-armed adversary.

Read the full feature story at the Los Angeles Times. Reporting for this article was supported by a grant from the Pulitzer Center on Crisis Reporting.