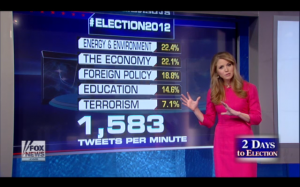 A day after Fox News announced it will use exclusive, swing-state trending data from Twitter in its election-night coverage, social media geeks eagerly wait to see just how they’ll use it. But for for the sake of accuracy, they’d better not rely on Twitter to predict a winner.“Throughout the night on Tuesday, Twitter will keep track of breaking news, of the polls and candidates in swing states, and give much of that information exclusively to Fox,” Fox News anchor Jenna Lee told viewers yesterday.The election is by far the hottest topic on Twitter tonight, and some experts predict that users could overwhelm the network, causing a twitter ‘blackout’ that lasts through the evening. Traffic at the moment that networks call the election, or when the loser gives his concession speech, could break the record set during the first presidential debate that saw 10.3 million tweets.Earlier today, Yahoo! News published a story by a PR company that used Twitter trending data to predict Obama will take Ohio. And Mashable has a map that shows which candidate is favored by Twitter data in 12 swing states.
But here’s why you should be skeptical: During the primaries, Atlantic Contributor Alexander Furnas explained why “You Can’t Use Twitter to Predict Election Results.” For one, Twitter users don’t mirror the electorate. And whereas prolific tweeters will influence the data tremendously, in real life every American gets only one vote.”It may be possible to model public opinion with Twitter, but it would require a much more sophisticated understanding than we now have about who tweets about politics and why, how their tweets relate to their offline actions, and how they differ from the general voting population,” Furnas wrote.You can follow Fox’s live online election-night coverage beginning at 8pm Eastern at http://live.foxnews.com/. But don’t take Fox’s word for it: Follow Twitter trending yourself at http://trendsmap.com/-Jacob Kushner (Twitter: @JacobKushner)

All the nation’s major cable TV networks are working in close step with each other projecting wins in early states despite only small numbers of votes being counted.

CNN, Fox and ABC all called Georgia, South Carolina and Vermont for Romney with less than 3 percent of the total votes accounted for (and only one percent in South Carolina).

A New York Times article today reported that the networks are being particularly cautious tonight in their projections following some major screw-ups in recent months. Most notably last June, CNN and Fox came under fire after they incorrectly reported that the US Supreme Court struck down Obamacare when in fact the court upheld it. Just last week, CNN furthered a false rumor that the floor of the New York Stock Exchange had been flooded with three feet of water in the wake of Hurricane Sandy. In fact, it remained perfectly dry.

And of course it’s impossible to forget the embarrassing screw ups during the 2000 election in which TV networks alternatively called Florida for Gore, then Bush before retracting their projections all together.

All the networks say they’ll abide by the rules not to project any national winner until 11pm Eastern, when the polls close on the west coast. Stay tuned to see if they keep their promises this time.

If you’re watching NBC, Obama’s on the verge of winning, so long as he gets Ohio, where so far he’s winning with 50 percent of the vote counted.

If you’re watching CNN, it’s far too close to call, but the key remains Florida.

Fox News was in the midst of a confusing panel discussion that ranged from the importance of Virginia as a state—generally—to the character of Bill Clinton.

Fox News yells “fraud.” Its source? A conservative group with a history of false accusations [21:47]

“In Milwaukee, a federal van from the government taking people to the polls. That’s reported by a group called Media Trackers,” said Fox News correspondent Eric Shawn at around 8:40 pm Eastern. “This ‘potential fraud’ has to get hunted down by prosecutors and the authorities.”Media Trackers claimed earlier today that a federal Jobs Corps van reportedly carried as many as 125 voters to the polls in Milwaukee, Wis. during various trips.“Poll workers inside the location struggled to handle the extra traffic created by the Job Corps participants brought in from a nearby training facility,” according to the report.Perhaps the authorities will check this report out, but Media Trackers shouldn’t necessarily be taken at face value.  According to PolitiFact the group is a conservative watchdog organization funded by American Majority, a Virginia organization founded by a leader of the Tea Party—and it has a history of making misleading or inflated claims about the electoral process. The factchecking site labeled a Media Tracker’s statement regarding the recall of Wisconsin Gov. Scott Walker as “Mostly False,” its second-worst rating.
Last month, The New Yorker’s Jane Mayer wrote about “The Voter Fraud Myth”—the myth being that America’s immigrants and convicts routinely vote even though they are ineligible to do so, and that liberals illegally use federal resources to help voters get to the polls. That hasn’t stopped conservative groups like Media Trackers and others from making many claims today of illegal voting.
-Jacob Kushner (Twitter: @JacobKushner) 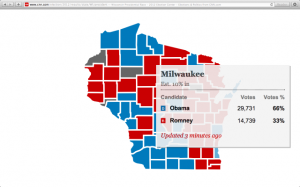 From Colorado to Florida and all the swing states in between, CNN is focusing its broadcast election-night coverage on the key counties that are expected to tip the race.It works like this: Wolf Blitzer announces breaking new results in from the latest swing state, then hands it over to John King who points to a county-by-county map of the state shaded in the familiar blue and red. King reads off the number of votes recorded in a handful of key counties, then tells us it’s still too close to call.The network has even gone a step further in states like Wisconsin, where a reporter spoke live from inside a Milwaukee County tallying center at around 10:30 pm. He described the results from specific, Republican-centric parts of the county to contrast them with those from the more liberal Milwaukee urban center.
CNN’s coverage is by no means unique this election. News media around the country presented their own analysis of the individual counties that were likely to ultimately decide the winner of tonight’s race. Most notably, The New York Times outlined how each campaign was courting voters in just a few dozen key counties across the nation during the final days before the election.But what sets CNN apart is that it seems to be the only TV network committed to continuing its ‘by-the-county’ focus right to the bitter end as election night heats up.CNN’s county-focused reporting may be a step in the right direction for the network that has made recent reporting errors and been called “boring” in comparison to Fox’s and MSNBC’s increasingly polarized reporting. The Economist wrote in September that CNN continues to lose ground to its network competitors just as it tries desperately to remain America’s principal, non-partisan TV news source.-Jacob Kushner (Twitter: @JacobKushner) 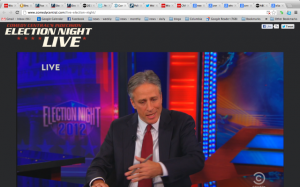 “We are projecting Barack Obama is the President of the Unites States once again four years later,” broke in Jon Stewart during the third segment of his election-night show. Calling today’s election “Democalypse 2012,” The Daily Show went live at 11pm Eastern to give its take on the race.“Good news for Mitt Romney: He has won as we can report tonight most of the confederacy,” said Stewart, who began his coverage by announcing Obama’s wins in Pennsylvania and Elizabeth Warren’s Senate win in Massachusetts to loud cheers from his studio audience.
Calling Florida a state “where Cubans go to live and where Jews go to die” he announced it’s still too close to call.Correspondent John Oliver ridiculed the sensational rhetoric of other network coverage, strapping iPads to his elbows and drawing on a tweet from a guy who said “I voted for Mitt Romney” to predict a Romney win.“Don’t tell me that cable news is not alive and kicking,” he concluded.Another correspondent poked fun at Obama’s small-scale fundraising tactics by which his campaign sent emails and texts to supporters asking for donations as small as $5.
“They’re asking for 12 dollars. Wait actually that’s 15 dollars– apparently Biden ordered hot wings.”Looking ahead to 2016, one of the Show’s commentators declared: “The big winner tonight seems to be Hillary Clinton, who Nate Silver is now predicting a 63 percent win over Jeb Bush.”-Jacob Kushner (Twitter: @JacobKushner)

Within minutes of declaring Barack Obama the winner of the 2012 presidential election, news outlets turned off the electoral maps and turned on the dozens of pundits they rely upon to comment on the results.“Do you think he should interpret this as a mandate?” Asked a CNN commentator.At Fox, a reporter talked about what Obama will have to do during his second term, before handing it back to an anchor who corrected him: “We want to emphasize that we here at Fox News have not yet called the presidential race.”Meanwhile, CBS quickly decided to cut the news altogether, favoring instead an uninterrupted stream of images and music from the Obama rally in Chicago where thousands of supporters awaited the President’s victory speech. Fox soon followed suit, but then returned to the studio to note that Romney campaign strategist Karl Rove was angry at the network’s decision to call the election for Obama.Following the brief respite, CNN returned to its county-by-county analysis.-Jacob Kushner (Twitter: @JacobKushner)
Read these stories as they were published at the Columbia Journalism Review.
Widgets
Follow @JacobKushner