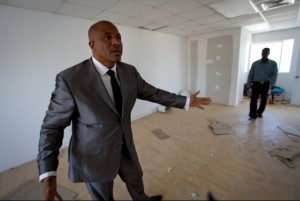 Senate Treasurer Fritz Carlos Lebon expresses his frustration at receiving a building from USAID that was not prepared to meet the needs of Haiti’s Parliament. Global Post photo/Jacob Kushner