Across the street from the shacks made of sticks, tarps and scrap metal that house thousands of earthquake survivors in downtown Port-au-Prince, the delicate sound of a tenor sax serenades a sizeable audience of music enthusiasts. This is Haiti’s international jazz festival, resurrected after an earthquake destroyed its venue city in January 2010, killing some 230,000 people and displacing some 1.4 million.

So where does a jazz festival fit into the reconstruction of a nation where 800,000 people remain homeless and threatened by a deadly cholera epidemic, their national consciousness disheartened by the undemocratic election held last November? “You can’t only take care of housing and water—all that’s really important for sure, but culture is really linked to the Haitian people,” said Milena Sandler Widmaier, who organized the festival along with her husband, drummer Joel Widmaier. “People need to be fed in the mind as well—not only in their body, but in their soul.”

Click HERE to read the full story as it appeared at Jazz Times. This article appeared in the May 2011 print edition of JazzTimes magazine. 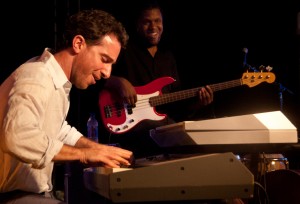 The revival of Haiti’s International Jazz Festival drew foreign acts like N.Y. Pianist Aaron Goldberg, who along with his Haitian-American accompanists, impressed an audience with Haitian favorites set to Jazz instrumentation. -Jacob Kushner for JazzTimes