The Western Hemisphere’s poorest nation is on the verge of receiving one of the largest sums of foreign disaster relief dollars history—and 19 people are eager to administer it as they contend for Haiti’s presidency on November 28.

Samdy Pascal is decidedly less excited. The eighteen-year-old mother who lost her home and her school in the January earthquake has no job, so she spends her days scrubbing clothes in front of her makeshift shack not far from the mountain of rubble that was once Haiti’s national palace. Behind her stands a statue of Jean-Jacques Dessalines, who led the nation to independence from France two centuries ago.

“All of my life, I listen and I read in the books about Dessalines and Haiti’s independence. But I don’t think Haiti is an independent country because we still have the same problems,” says Pascal. “We can’t find anything to eat, to drink, to go to the hospital is a problem, we don’t have any house to live in. The foreign NGOs have to receive the money because they can do better than the government. I don’t think we have independence.” 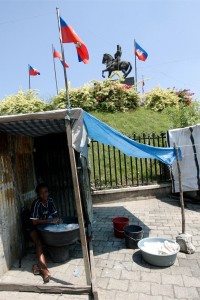 Samdy Pascal, 18, says she has no faith in her government’s ability to implement U.S. reconstruction funds. -Jacob Kushner

As Haiti’s presidential and parliamentary elections near, the looming $10.2 billion in post-earthquake reconstruction money — a sum that is $3 billion more than Haiti’s pre-quake GDP — is creating a pronounced divide between the presidential candidates, all of whom are eager oversee and reap political capital from the funds, and the Haitian electorate including Pascal, that is highly skeptical of its government’s ability to implement that aid.

The promised post-quake U.S. contribution of $1.15 billion for Haiti’s long-term reconstruction (about $917 million of which is expected to finally start arriving this month) represents only 11 percent of the total aid pledged by international donors, but the United States is playing an outsized role in rebuilding Haiti nonetheless. Former President Bill Clinton is acting as U.N. Special Envoy to Haiti and co-chair of the Interim Haiti Recovery Commission, a sort of interim governing body for the nation.

With current president René Preval’s administration in disarray — 7 percent of all government employees died in the earthquake — many in Haiti believe maintaining sovereignty during the reconstruction process is impossible. But distrust of foreign NGOs and governments is high, and escalated into violent protests this month against the U.N. peacekeeping force accused of inadvertently initiating a cholera epidemic that has already infected over 20,000 and shows no signs of stopping. Even so, that distrust is offset by Haitians’ distrust of their own political leaders. “Normally they’re supposed to give the money to the government,” says Pierre-Louis Yves, a community activist in Port-au-Prince. “But usually our government always diverts it, and the United States always supports this kind of government.” Current President René Preval has never been indicted for corruption, but he is often accused ineffectiveness in his response to the January earthquake and for tweaking the selection process for Haiti’s election commission board members to stack it with his supporters in advance of the Nov. 28th elections.

Of the leading candidates, law professor Mirlande Manigat (Rally of Progressive National Democrats of Haiti) is eager to strengthen government institutions and change the justice system. Pop star Michel Martelly (Citizens Speak Out) says he hopes reconstruction funds will focus on housing and improving the nation’s emergency response capabilities. Businessman Charles-Henri Baker (Respect) says the nations’ air and sea ports must be revamped to achieve any sort of meaningful infrastructure development. Director of the National Center for Equipment Jude Celestin (Unity) could not be reached for an interview but is expected to support the reallocation of displaced persons to areas outside of Port-au-Prince.

At first glance, candidates like Baker share voters’ lack of faith in the Haitian state. Baker placed fourth in a poll conducted last month, behind Manigat, Martelly and Celestin. A businessman who believes reconstruction funds should prioritize air and sea ports, Baker says Haitians have every right to distrust a government that has little to show for the money it has received thus far. A recent Associated Press investigation revealed that nine months after the earthquake only 2 percent of the rubble had been cleared, and 1.3 million Haitians continue to live in IDP camps as they await permanent housing promised by the government and international actors in Haiti’s reconstruction plan.

But the crucial difference between candidates like Baker and the general Haitian electorate is that each of the former is confident that, if elected, he or she will oversee a squeaky-clean and productive Haitian state. “Haitians have been screwed so many times they don’t believe in anyone. The first thing is we need to get an honest government,” said Baker in an interview.

Most Haitians have no such faith. “When the money comes, we will not find it because the local authority will pocket it,” says Rodney Edouard, a middle-aged father of one who has lived in a downtown tent camp since his home was destroyed in the earthquake but receives no aid or services from the government or NGOs. He’s worried the next government could be even worse by misusing the large amount of foreign reconstruction aid about to arrive.

The U.S. State Department seems to agree. The spending plan it submitted to congress allocates only $12.5 million of the reconstruction aid to direct budget support to the Haitian government, part of which comes from a $120 million multi-donor trust set aside for large projects such as housing and rubble removal. The remaining $785 million or so will reach Haiti via USAID, NGOs and international financial institutions such as the Inter-American Development Bank. About half will help rebuild Haiti’s infrastructure; the next largest sum is intended to strengthen the Haitian government’s ability to function and improve the justice system.

Haiti’s next president, whoever it is, will officially have little say over all this: He will have veto power over all reconstruction projects until September, but won’t have any ability to determine what those projects actually are. “I think the people of Haiti who feel this will all get swallowed up in graft and corruption — that won’t happen,” says State Department Haiti Special Coordinator Thomas C. Adams. His press officer, Caitlin Klevorick, put it more bluntly: “The president of Haiti has never really had a yea or nay say in how money is spent because we haven’t gone through the government really.”

Still, Leslie Voltaire, the presidential candidate for the Ansanm Nou Fo party with a platform of developing infrastructure through foreign investment and the Haiti liaison to Clinton’s U.N. delegation, believes that Haiti’s next leader can use the bully pulpit to leverage foreign aid. “If he has veto power you have to negotiate with him, so you have to negotiate with his program,” he told me. “The president can go to the public and say ‘this is what I want’ and say ‘this is a sovereign country and this is what we should do.’”

But many Haitians would just as soon keep the president’s hands tied. “People are still living in camps after 10 months. No, they do not believe in this government to implement foreign aid,” says Etant Dupain, director of the grassroots advocacy organization Bri Kouri Nouvel Gaye (Noise Travels, News Happens), which prints an underground newspaper in Port-au-Prince. Dupain and other community leaders say it’s problematic that aid money moves through NGO and humanitarian organizations, which spend it on salaries for foreign personnel that could otherwise go to Haitians. But better them than a corrupt — or worse, incompetent — government, says Dupain. “What we want is a government that can negotiate with the international community to put Haiti’s interests first,” he says. “What we have is totally different. We have candidates who want aid to make campaigns, to become millionaires. People don’t believe in those candidates.”

With their nations’ economy struggling to recover even to its pre-earthquake level, Haitians are very particular as to how to spend the billions of dollars in aid. “Haitians certainly welcome the aid of foreign countries, but they don’t want to lose control or management of their own affairs, they don’t want those decisions to be made by foreigners, and they don’t want the public administration of the state to be weakened by losing the decisions of power,” said Rosny Desroches, director of Haiti’s Initiative on Civil Society. He says foreign aid will not help Haiti rebuild its core institutions if the money undermines the government’s authority by eluding it altogether.

To be sure, not all Haitians are passionate about how Haiti’s next administration implements foreign aid — many don’t intend to vote at all, saying the election is a distraction from their immediate needs of housing, food and jobs. Others are apathetic. When asked their thoughts on implementing foreign aid, a group of men advertising over loudspeakers in the back of a pickup truck for Celestin returned blank stares. “Jude Celestin paid us to do this, but we’re not going to vote for him,” one of them told me. “We’re in it for the money.”

In Haiti, there’s one thing voters and candidates can agree on.