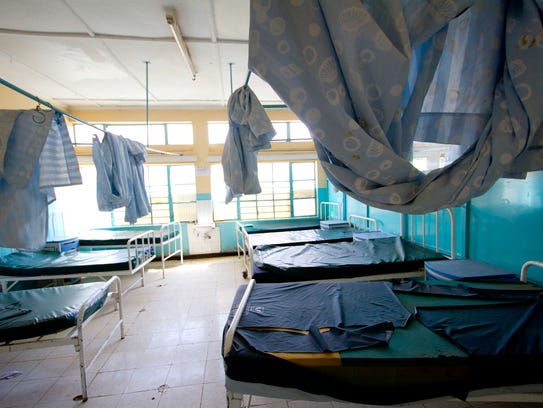 Empty beds at a hospital in Kenya where patients have been turned away because there are not enough doctors working to treat them. Staff say typically the beds would be full of patients. Jan 30, 2016 (Photo: Jacob Kushner)

NAIVASHA, Kenya —  Nancy Ndirango grimaced in pain as she waited eight hours at a hospital here with a broken right leg, the result of a fall on her way to school. But there was no doctor to see her because they are on strike.

“People can die,” Ndirango, 17, complained. “(The government) should pay them what they’re asking so they can get back to work.”

Ndirango’s plight at the eerily empty hospital in this town, about 50 miles north of the capital, Nairobi, is being felt by millions of Kenyans as a national strike by 5,000 public-sector doctors demanding better pay and work conditions enters its fourth month. They walked off the job Dec. 5 to protest the government’s failure to make good on a 2013 agreement to double salaries and hire thousands of new doctors to fill a severe shortage of physicians.

“Sadly it’s the lower class that’s suffering,”said Judy Karagania, a resident in opthalmology at Nairobi’s largest public hospital. Sometimes, overcrowding in Kenya’s underfunded public hospitals can be a matter of life or death.