Wisconsin residents have made many contributions to the relief efforts in Haiti, but the country still struggles to recover from the earthquake that rocked the country a little more than a year ago. One church in Cedarburg is doing its part by funding an orphanage and school in Port-au-Prince, the country’s capital. Church members decided to get involved after the orphanage’s co-founder spoke at the church.

On Jan. 12, 2010, the world turned its attention to the small island nation of Haiti as a 7.2-magnitude earthquake destroyed the nation’s capital, killing some 230,000 people and injuring 300,000 more. Americans have donated an estimated $2 billion to emergency relief efforts, and Congress recently approved $1.2 billion in reconstruction aid — part of the total $10.2 billion pledged by governments around the world.

Wisconsin businesses have contributed over $1.5 million, according to the Donors Forum of Wisconsin, and thousands of the state’s residents have donated relief money online or by text. But despite all the money pledged in the year since the catastrophe, Haiti still looks, in most ways, like it did the day after the earthquake. 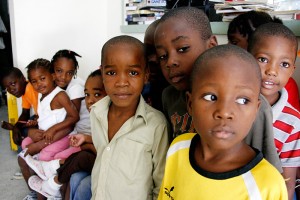