By Anne-christine d’Adesky with Jacob Kushner

On September 25, a series of urgent SMS text messages from Haiti sent many racing to their computers and radios again, fearing the worst. Like the historic 30-second earthquake that leveled much of Haiti on January 12, a freak storm had slipped over the mountains, creating fresh calamity. Amwe! Help! ran the tweets and texts. Nouvo krase! We’re crushed again.

Click HERE to read the full story as it appeared at World Pulse magazine. 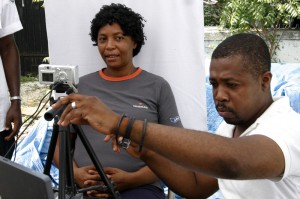 Nurse Cadue Guerier is photographed for her National ID card, which will enable her to vote in November 28 elections. -Jacob Kushner.

This time, the falling structures were not 18th-century gingerbread houses, but UN tents and loose tarps erected amid and on top of quake rubble and on arid plains that still house over a million still-displaced quake survivors. Many are women and children.

Many of the women we work with in the camps are injured and homeless, again!!! a Partners in Health colleague texted. The TB tent at the general hospital was blown away and the 70 patients, some on oxygen, were standing in the rain crying… seems WHO was able to send another tent, but in another camp, the medical clinic tent also went down and has not yet been replaced.

The SOS texts arrived just as Haitian and world leaders mingled with Hollywood celebrities at the Clinton Global Initiative (CGI) meeting in New York to discuss Haiti’s progress and its upcoming elections. One hot topic: What are the chances a woman may take office now, reversing Haiti’s long history of male presidents? Mirlande Manigat, an ex-First Lady and professor, is currently leading a crowded field of 34 hopefuls that also include Josette Bijou, a physician and ex-Minister of Health. Another 15 were rejected by Haiti’s Provisional Electoral Council (CEP), including global hip hop star Wyclef Jean, a Haitian-American with primary residency in New Jersey, and Claire-Lydie Parent, the mayor of Petionville, a suburb of the destroyed capital, Port-au-Prince.

Globally, the presence of two women has excited Haiti watchers, yet in Haiti itself, the exclusion of candidates, some on technicalities, has raised fresh criticism of the CEP, and charges that Haiti’s current president, Réne Préval, is calling the shots. At press time, many opposition parties planned to boycott or sit out the elections, including women’s groups to the left of the political spectrum.

“In Haiti we say these elections are a selection,” says Yolette Gentil, director of Kay Fanm, an NGO helping women who are raped find safer shelter. “It’s not possible to have an election right now. All the registration lists were destroyed. We aren’t able to know who is dead and who is alive. This is something that makes the election not serious.” She adds, “There is no transparency.”