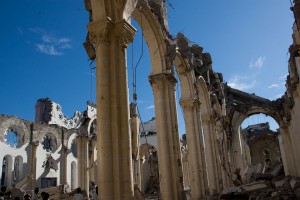 Haiti’s National Cathedral on the anniversary of the earthquake. -Jacob Kushner