Those who lived through the earthquake struggle to survive its aftermath

PORT-AU-PRINCE, Haiti – Today, Haitians across the country will pause to remember the earthquake that devastated their nation exactly a year ago.

They will sing and pray in unison outside the ruins of Haiti’s national cathedral.

Some will gather to discuss the upcoming election; others will talk about the role the United Nations Stabilization Mission in Haiti (MINUSTAH) has had in maintaining order; and others will discuss the reconstruction process.

But Islande Vilmeus will not be participating. While others choose to remember, the 30-year-old wants to forget – forget that her tonton, the uncle who raised her since her parents died at age 10, was among the about 300,000 who died in the earthquake.

She wants to forget that, two weeks ago, she returned from the market to find her 5-year-old son dead on the floor of her tent from an unknown cause. She said he might have been poisoned.

The boy’s body lies unclaimed at the local morgue since she can’t afford a funeral.

Vilmeus and her six other children survived the earthquake that brought their home crumbling to the ground. But they are not surviving its aftermath, she says, as she cradles her 10-month-old son Abraham who hasn’t eaten yet today. 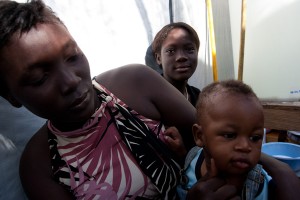 Islande Vilmeus, 30, waits to see a doctor with her daughter Dianna and baby son Abraham, who is sick with a fever. (Jacob Kushner for Infosurhoy.com)