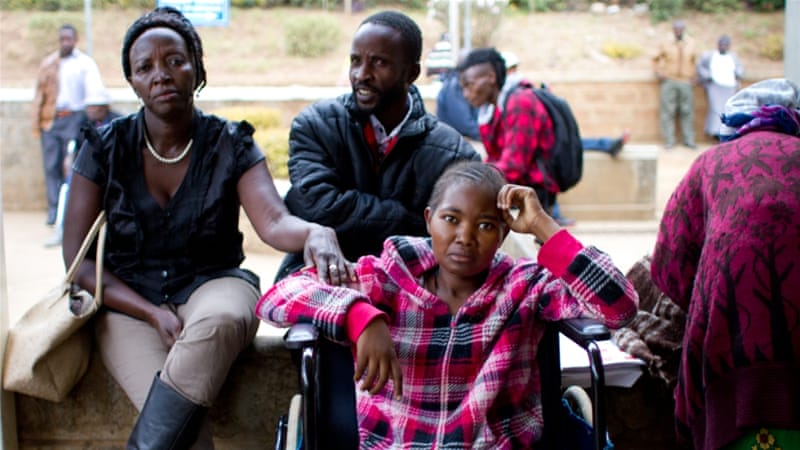 One month after Al Jazeera published the story of Dorcas Kiteng’e’s struggle for cancer treatment in a nation whose doctors are on strike, the 25-year-old has died due to lack of proper care.

Some 5,000 public sector doctors walked out on December 5 after Kenya’s leaders failed to make good on a 2013 agreement to raise salaries, hire new physicians and improve conditions in public hospitals. The standoff between the health ministry, which lost $53 million last year due to corruption, and the doctors, continues to drag on. Nobody knows how many hundreds or thousands of Kenyans have died as a result of the government’s refusal to pay and the doctors’ refusal to return to work until that happens.

This is the story of one of those victims – the final days in the life of Dorcas Kiteng’e.

Read the article at Al Jazeera.

Kenya’s hospitals have almost ground to a halt, with millions facing a third month in a row without healthcare as doctors strike over low pay and poor working conditions.

The public healthcare system has long been overburdened and underfunded, but has now virtually stopped functioning after 5,000 doctors walk out in December after attempts to reach a compromise with the health ministry stalled.

“The machines break down frequently, the doctors are overwhelmed. The patients, they are so many that they are lying on the ground,” said Dr Judy Karagania, an ophthalmology resident at Kenyatta National hospital (KNH) in Nairobi, who is taking part in the industrial action.

Karagania and her colleagues are refusing to return to work until the government makes good on a 2013 agreement to dramatically increase salaries, hire thousands of new doctors and address drug and equipment shortages.

As the standoff drags on, Kenyans are suffering from the lack of care.

“The army doctors are turning away patients,” said Karagania, who normally works as a resident medical officer at KNH. “They’re only handling the emergencies of emergencies.”

Read the full article in The Guardian.