One year after the earthquake, more than a million Haitians remain displaced

PORT-AU-PRINCE, Haiti – Nearly a year since a 7.0-magnitude earthquake destroyed the nation’s capital and surrounding areas, much work remains in the reconstruction process that’s way behind schedule.

More than a million remain displaced in unsanitary – and unsustainable – tent cities, many without consistent access to clean drinking water, according to the U.S. State Department.

The majority of buildings throughout Port-au-Prince are in the same collapsed state they were in after being pulverized on Jan. 12, 2010. Fewer than two million of the nine million cubic meters of rubble have been removed, and debris still clogs city streets, according to the U.S. State Department.

“I think there’s a general feeling – and we share this feeling – that the reconstruction is much slower than we had hoped,” said Eric Overvest, Haiti Country Director for the United Nations Development Program (UNDP). “The first six months, all the attention went to humanitarian assistance, which was very necessary, but the change to development started very late.”

Click HERE to read the full article as it appeared at Info Sur Hoy. 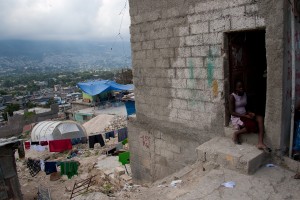 A girl sits in the doorway of one of the few structures in Port-au-Prince’s Fort National neighborhood that was not leveled by the earthquake on Jan. 12, 2010. No permanent shelters have been reconstructed in the area, forcing many residents to live in tents. (Jacob Kushner for Infosurhoy.com)