PORT-AU-PRINCE, Haiti – President Réne Préval said he would not step down until the nation’s next president has been elected, even though his constitutionally mandated term ended on Feb 7.

Hundreds of protestors demonstrated in front of Haiti’s collapsed National Palace on Feb. 7, demanding Préval be replaced by a transitional government until Haiti’s election is resolved. 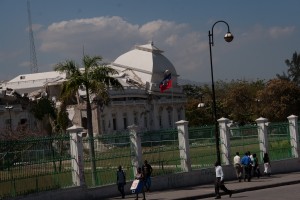 Haiti’s next president will lead the impoverished nation’s post-earthquake reconstruction, which includes rebuilding many government institutions such as the National Palace. (Jacob Kushner for Infosurhoy.com)

Protesters demand President René Préval step down, but successor not yet chosen

“He’s supposed to leave because his time is over,” said Fritz L’amour, a beverage vendor in Port-au-Prince who saw demonstrators pass by his stand the morning of Feb. 7.

Haiti’s electoral law dictates a president’s five-year term ends on Feb. 7. But Préval said since he did not take office until May 14, 2006 because of election-related delays, he will complete a full, five-year term.

Haiti’s House of Deputies and Senate passed a law last year intended to grant Préval authority to remain in power in the event of a delayed election.

“This is a mute point. Parliament at its last session voted into law the extension of his mandate,” said Alice Blanchet, Special Advisor to Prime Minister Jean-Max Bellerive. “It provides for the democratic process to continue, it also provides for more stability … and it’s done within the norms and the rule of law.”

But analysts said that the law cannot alter the Constitution, which specifically states a president’s term ends on Feb. 7, regardless of when the leader took office.

“This is unconstitutional, but Préval has the support of the international community to keep power illegally,” said constitutional lawyer Samuel Madistin, referring to statements by foreign officials supporting Préval’s decision to stay in power.