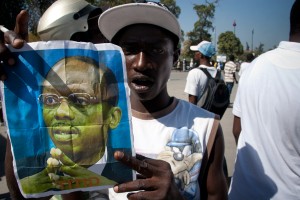 Pullos Pierre, a 26-year-old from Port-au-Prince’s Cité Soleil slum, holds a picture of Aristide during a protest demanding current president René Préval steps down from power. (Jacob Kushner for Infosurhoy.com)

Aristide, a priest who frustrated the Catholic Church by preaching Liberation Theology that prioritized advancing the oppressed at the cost of disobeying authority, enjoyed a huge following by Haiti’s lower class. Many in Haiti still revere Aristide as a saintly figure, remembering how violence and corruption seemed to decrease dramatically under his tenure.

“He will lift us up. He will wash the streets clean and rebuild this country,” said 20-year-old Elise Mardise during a pro-Aristide rally in early February.

Aristide, 57, largely is remembered for advocating civil liberties denied under the 29-year Duvalier dictatorship that preceded his rise to power. But after he was exiled by a military coup and eventually returned to serve a second term (2001-2004), some accuse him of succumbing to the same type of government corruption as his predecessors, using thugs to silence right-wing protestors and student activists.