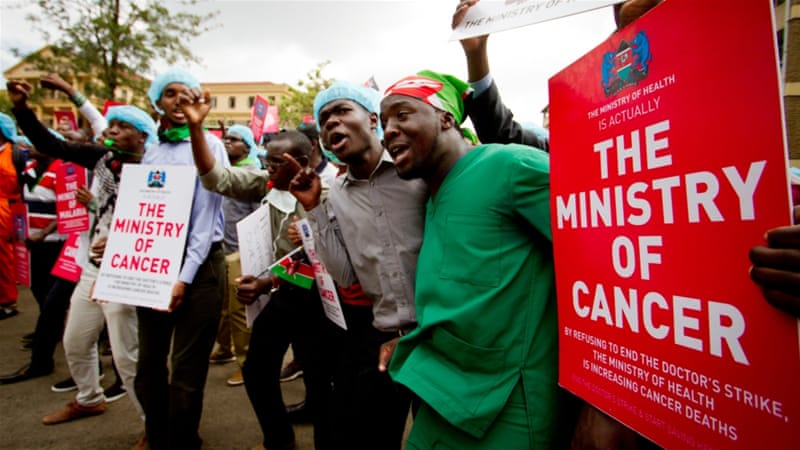 Kijabe, Kenya – At the bottom of a winding, tree-lined road, a crowd of patients spills out of the entrance of a private hospital waiting room on to a patio and a dirt parking lot. It begins to rain, and a man on crutches tries to hobble into the cramped building for cover.

Sitting in a wheelchair outside the door is Dorcas Kiteng’e, a 25-year-old woman suffering from cancerous growths in her ovaries.

Kijabe is the third hospital they’ve visited since they arrived in the Kenyan capital Nairobi last week, looking for an oncologist who could perform the surgery, only to be turned away.

“They sent us to Agha Khan,” says Mutambuki, referring to the private Nairobi hospital that’s regarded as one of the nation’s finest. “But we know we were not going to be able to afford that.”

She fears time is running out to save her sister-in-law: “It’s a matter of life or death.”

Two months ago Kenya’s public sector doctors walked out on strike, and millions of Kenyans who normally depend on them are beginning to overwhelm the nation’s private hospitals, particularly in rural areas.