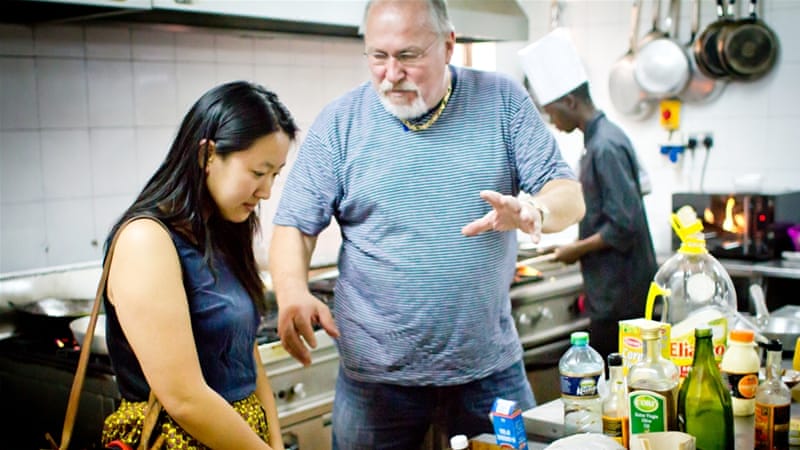 Two foodies team up to explore the Kenyan city’s diverse foreign cuisine, and the entrepreneurs who brought it here.

Nairobi, Kenya – On a drizzly afternoon in Nairobi, Sandra Zhao sits at a hand-crafted wooden table sipping green tea from a ceramic Japanese cup. Across from her, the man who built the table and the restaurant that houses it describes the different Japanese delicacies as they arrive.

First there is pink-coloured tamago, a Japanese appetiser made of egg and dashi, and a light miso soup. Then comes a plate of salmon maki. Next is the main affair: Tantanmen (spicy noodle), a rich brown broth made of fish stock with home-made noodles that the restaurant’s owner, Yuki Kashiwagi, says is a favourite Japanese late-night food. And last, a plate of Japanese pancakes, or Okonomiyaki, topped with flakes of dried tuna that are so thin they wiggle in the afternoon breeze. “I love that!,” Zhao exclaims. “I know – that’s why I ordered it,” says Kashiwagi.

Zhao, after all, has been frequenting Kashiwagi’s restaurant since the day it opened. Creator of the Nairobi specialty cupcake startup SugarPie, she is teaming up with another American foodie – cupcake collaborator and founder of Nairobi’s Open Table Cooking School April Dodd – to publish a cookbook that will feature recipes from 30 Nairobi immigrant restaurant owners and the stories of what brought them here. Called Im/migrant Nairobi: A Cookbook, the project will feature Kashiwagi’s restaurant.

A continental hub for all manner of tech start-ups, NGOs, UN agencies and more, Nairobi is one of the most diverse cities in Africa. Indians, who began immigrating to Kenya’s coast more than a century ago, introduced spices, chai and chapatti that have found their way into mainstream Kenyan fare. Ethiopians who escaped the rule of Haile Selassie operate restaurants that adhere closely to traditional Ethiopian recipes and ceremonies. Recently, Chinese, Korean, Japanese and other Asian immigrants are reigniting the trend. If Kenya is East Africa’s country for foreigners, then Nairobi is the Mecca for their culinary traditions.